Government has formulated and implemented new fundamental regulations for planning and construction of houses, the Urban Planning & Development Act, Building Code for Nepal, 2072.
The building buy laws Nepal 2072 has paid special attention to reconstruction after the earthquake and required open space. For proposals concerned with residential construction planning, the area in such planning shouldn't be less than specified in Land Rules, 2021. Similarly, adjacent houses can only be constructed if at least three houses of same height are there. Similarly, while applying for the Building Construction Permit in case of constructing adjacent buildings, the responsibilities to be borne by owners of such houses while repairing such houses, should be submitted together.
Similarly, the blueprint of building also has to be submitted along with the proposal of development of land for public uses and building unity planning. Such planning should be accepted by local department in accordance with a reference from technical committee. While giving permit to a construction planning, it has to be ensured that at least 15% space is reserved for pathway, and 5% has been separated for open space; such open space shouldn't be less than 80m2 in area and 8 meter width. Similarly, the area of such open space shouldn't touch the outer boundary of the proposal construction planning.
Road
In case of construction planning for public uses, the main road of the construction area connecting the existing public road shouldn't be less than 8 meter in width. If the existing locality with high population density is demanded for reconstruction by united house construction, the regulation shall be followed for giving the permit. In case of restricted construction planning, each road from such construction connecting to the existing public road be in such a way that a four-wheeler can enter up to 20 meter in it and exit; separate roads should be for entering and exiting.
If a 6 meter wide public road touches the land under proposal for residential construction, the permit shall only be given to those proposed planning that includes construction of 10 meter high residential constructions. Constructions above 10 meter and construction of public buildings are only allowed if a public road with 8 meter width or more touches the land. The minimum radius of any turnings in a road should be more than 3.5 m.
Height of building and set back
The new building code 2072 requires you to maintain at least 1.5 meter of setback (distance between two houses), in case if your building is up to 10 meter in height. If you are sharing the boundary with a public building, and if your building is above 10 meter but below 17 meter in height, a minimum setback of 3 meter should be maintained, which, however, is 2 meter in case of the other buildings adjacent to your construction.
For any construction above 15 meter, you have to maintain the setback with the near construction in the ratio of 4:1, but not less than 5 meter.
Wall
Construction of boundary wall above 4 feet is prohibited, however, you can have the wall net up to 1.2 meter on the top.
Residential houses
As per the current building construction norms, if your land is up to 250m2 in area, you are allowed to use 70% of its space, which is 60%, if the area of your land is more than 250m2. 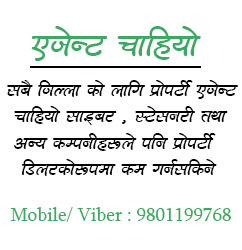 Investing in a new home? Now get all the information from the Nepal Property Expo 2018

If you are wondering for an appropriate option to invest in a home or land, we are here to fulfill your desires and provide you all the information and solutions in a single place. Nepal land and Housing Development Association will hold a Nepal property expo from June 15 to 19 at Bhirkutimandap in Kathmandu, which will answer all your inquiries about land, housing, apartments, home loans, various constructions materials and many more.It is informed that various businessmen and potential customers who are significantly contributing to the development of scientific, systematic and secure land and the urbanization of “New” ...